The Bank of Japan’s headquarters in Tokyo

“I wish I could say that the BOJ adopted a new policy in September in anticipation of Donald Trump’s victory,” said a BOJ executive. He seemed pleased with the outcome of the bank’s yield curve control.

Takashi Kamiya, chief economist at T&D Asset Management, said theoretical 10-year Japanese government bond yields would have been around 0.5% if the BOJ had not adopted the yield curve control.

This formula predicted how actual JGB yields would move, until the BOJ launched the yield curve control in September. The spread between theoretical and actual yields started to widen. 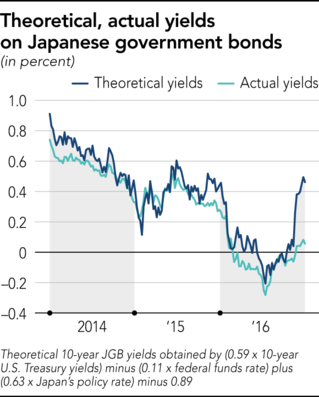 The graph shows that actual government bond yields have remained at around zero despite the fact that theoretical 10-year JGB yields are rising along with the uptick in U.S. Treasury yields.

The BOJ’s monetary policy becomes more accommodative as the spread between theoretical and actual yields widens. The broader the gap between Japanese and U.S. long-term interest rates gets, the more likely the yen will weaken against the dollar. The BOJ’s monetary easing and the weaker yen have also buoyed Japanese stocks.

The situation in Japan is in stark contrast with China. Unlike in Japan, yields on Chinese government bonds are rising sharply along with those on U.S. Treasurys. The People’s Bank of China, the central bank, does not use yield curve controls, but that is not the sole cause of the rise in the Chinese bond yields.

With private capital flowing out of China, Beijing has no choice but to meet rising demand for foreign currencies by digging into its foreign reserves. Since foreign reserves are held by the PBOC, this means the bank is tightening its monetary policy unintentionally.

If this continues, China will likely be hit by a decline in bond and stock prices as well as a weakening yuan, and this will affect the U.S. and Japan as well. U.S. authorities are likely to strengthen their expectations for Japanese investors’ buying, as China’s purchases of U.S. Treasurys can no longer be expected. 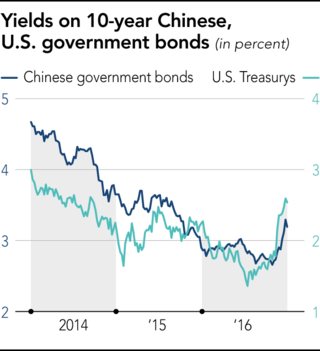 Translating it into monetary policy, the BOJ’s yield curve control is expected to be used as an anchor to stabilize U.S. Treasurys.

That reminds us of the so-called “anchor theory,” which emerged after the global stock market chaos, known as Black Monday, in 1987. The BOJ’s policy to keep interest rates low was later criticized for leading to the expansion of the subsequent bubble economy.

The BOJ’s monetary policy is likely to become even more accommodative, as it will take some more time for the bank to achieve its 2% inflation target. Stock and currency market participants may see signs of bubbles forming, but may not want to miss out on opportunities that present themselves.

Buy the book on Amazon

Buy the book on iTunes